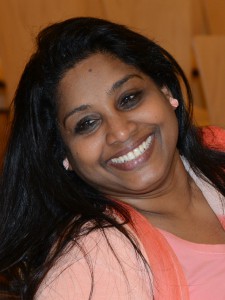 Born to a modest family, which is deeply rooted in Buddhism, Lakshmi Devi grew up as the youngest of five children at the east coast of Sri Lanka. Her parents, grandparents and the monks of the village cloister shaped her childhood, which was imbued by love and sympathy for all beings.

The teachings of the unity of all religions and the equality of all human beings she could experience already early in her life. She often speaks about how happy it made her, when children of different religious beliefs she arnong them, played with each other peacefully – free from the concept of caste or the feeling of being different, Muslims, Christians, Hindus, Buddhists, all children of one father. Due to the chaos of war the family had to flee several times, which strengthened their trust in Buddha’s help and protection. Her parents set Lakshmi Devi an example in the way one should Iive and that only trust in and devotion to God and the teaching of dharma (uprightness) can create true safety and hope.

When in 1988 Lakshmi Devi was led to her satguru Shri Sathya Sai Baba through God`s invisible guidiance, a door opened for her and behind it she found answers to all her questions.

Shri Sathya Sai Baba`s loving guidance and instructions extinguished the burning grief and pain of her longing to find the true home. The questions „Who am I, where do I come from and where do I go?“ were answered once and for all.

The unity of all religions, the love for all beings as well as the devotion to the Creator and the teaching of dharma (uprightness) are the messages which Lakshmi Devi embodies; through her life and work she sets an example and thus she encurages human beings to follow this universal and liberating teaching.